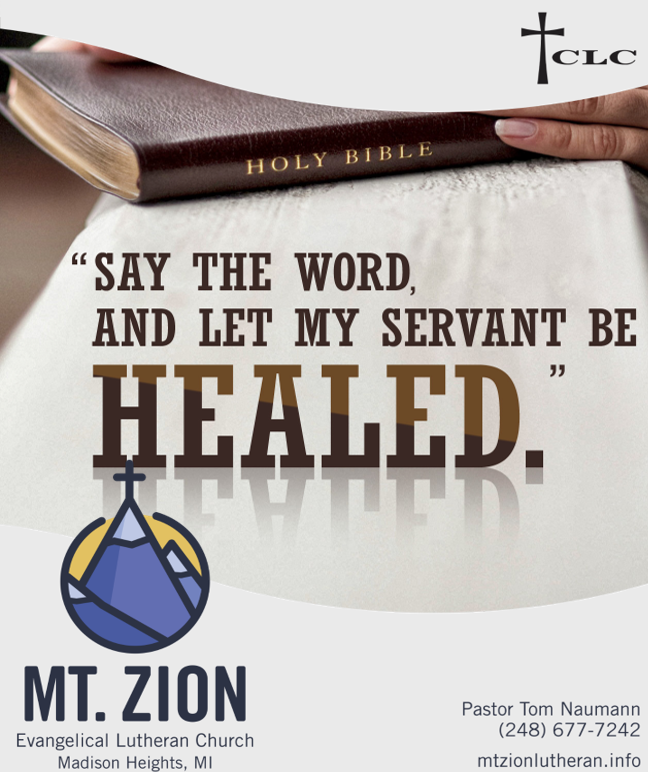 Matthew 8:1-13 When he came down from the mountain, great crowds followed him. 2 And behold, a leper came to him and knelt before him, saying, "Lord, if you will, you can make me clean." 3 And Jesus stretched out his hand and touched him, saying, "I will; be clean." And immediately his leprosy was cleansed. 4 And Jesus said to him, "See that you say nothing to anyone, but go, show yourself to the priest and offer the gift that Moses commanded, for a proof to them." 5 When he entered Capernaum, a centurion came forward to him, appealing to him, 6 "Lord, my servant is lying paralyzed at home, suffering terribly." 7 And he said to him, "I will come and heal him." 8 But the centurion replied, "Lord, I am not worthy to have you come under my roof, but only say the word, and my servant will be healed. 9 For I too am a man under authority, with soldiers under me. And I say to one, 'Go,' and he goes, and to another, 'Come,' and he comes, and to my servant, 'Do this,' and he does it." 10 When Jesus heard this, he marveled and said to those who followed him, "Truly, I tell you, with no one in Israel have I found such faith. 11 I tell you, many will come from east and west and recline at table with Abraham, Isaac, and Jacob in the kingdom of heaven, 12 while the sons of the kingdom will be thrown into the outer darkness. In that place there will be weeping and gnashing of teeth." 13 And to the centurion Jesus said, "Go; let it be done for you as you have believed." And the servant was healed at that very moment.

I. To the weak who boldly trust in His will

II. To the strong who humbly believe in His Word